Gene silencing by RNA interference is a broadly used technology in the life sciences, with siRNA and microRNA (miRNA) mimics being widely used in experimental set-ups in vitro. In contrast, for in vivo set-ups i.e. in rodents and other small animals, one of the challenges of siRNA and miRNA mimics is resistance to endo- and exonucleases present in the body fluids.
Various strategies such as chemical modifications of ribose backbone or nucleic acids derivatives (i.e. locked nucleic acids) are so far successfully used, but exclusively from pharmaceutical companies. These technologies are not available to the life scientists in their daily work at the bench, at reasonable costs.
Riboxx has developed a new technology that generates very stable RNA duplex bearing the RNAi-cap, with an application as siRNA (iBONi® siRNA and iVORi® siRNA) or miRNA mimics (CONmiR®). These perfectly annealed siRNA and miRNA mimics are resistant to serum nucleases for at least 3 days (72h), offering the possibility for life scientist to perform efficient in vivo experiments, with optimal cost of goods.
In this study, we show that siRNA and miRNA mimics displaying the RNAi-cap are much more stable in serum than siRNA (without the RNAi-cap) conventionally manufactured by chemical synthesis and annealed following heating/cooling of the single strands. Therefore, siRNA and miRNA mimics manufactured at Riboxx are best suited for gene silencing experiments in vivo.

B.   Results and Discussion

Duplex stability was assessed by measuring the melting point of the duplex. Therefore, three different siRNAs were used. All three siRNAs have the same sequence in both guide and passenger strand, except for the presence of overhangs or the RNAi-cap, as shown in Table 1 below. 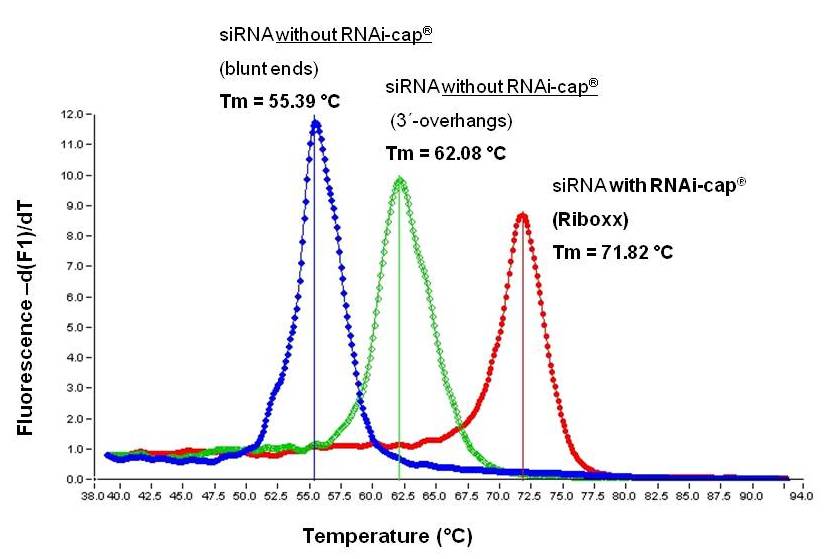 B.2   The RNAi-cap increases resistance of siRNA or miRNA mimics to serum degradation up to 3 days

RNA as a single strand or as a duplex is usually degraded in serum within minutes (de Fougerolles et al., 2007). This problem has been addressed so far by using different strategies, such as modifying the ribose backbone through chemical modifications at different positions (de Fougerolles et al., 2007). Another approach consists in increasing the stability of the RNA duplex. In an previous study, we have shown that dsRNA of 100 bp consisting of a stretch of cytidines (C100) and guanidines (G100) with a Tm of almost 100 °C displays a high stability in serum (mouse, men and FCS) up to 7 days (Naumann et al. 2013).
Based on these observations, it was postulated that siRNA with a higher Tm would be more resistant to degradation in serum than siRNA with a lower Tm.
To test this hypothesis, siRNA with two different Tm were incubated in human serum for 72 hours (3 days), and their integrity assessed on native PAGE. 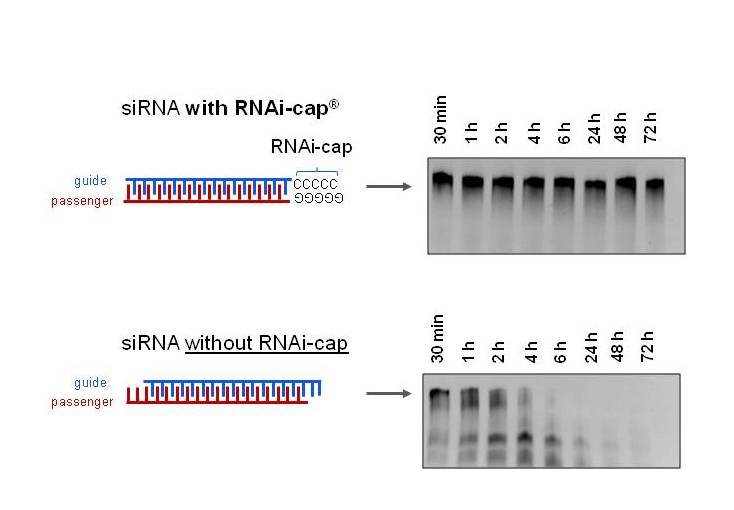 Fig. 2. The RNAi-cap confers serum resistance to the siRNA. siRNA were incubated at a concentration of 3 µM in human serum (80% v/v) at 37°C for 72 hours (3 days). At indicated time points, integrity of the RNA duplex was assessed by 20% native PAGE. Visualization was performed by UV transillumination after staining by GelRed.

One of the important issues in performing gene silencing is the validation of in vitro results in a small animal model in vivo. Ideally, the same siRNA has to be used in vitro and in vivo. Usually, scientists performing in vivo experiments are limited by the choice of technologies compatible with in vivo experiments. They have to redesign the siRNA by adding chemical modifications, going back and repeating the experiments with the chemically modified siRNA. This translates in high costs of goods, time and resources, with an uncertain outcome.
Our working hypothesis is that increased stability of the RNA duplex correlates with an increased resistance to serum nucleases. To this end, we have compared the resistance of two siRNA to degradation in serum. siRNA displayed the RNAi-cap or not, hence having two different melting points (Tm). Our results show that siRNA with high Tm is much more resistant to serum nucleases. Increased Tm is strongly dependent on the manufacturing process of siRNA duplex and the presence of the RNAi-cap, with subsequent increase in resistance to serum nuclease.
In addition to conferring resistance to serum nuclease, the RNAi-cap technology developed at Riboxx increases potency of siRNA and reduces off-target effects (Nolte et al., 2013). The RNAi-cap technology is applicable to any siRNA designed by any algorithm, from any supplier. The RNAi-cap technology is available at Riboxx in different siRNA and microRNA mimics formats (iBONi siRNA, iVORi siRNA, CONmiR miRNA mimics).