RNA is implicated in many and various processes in the cell metabolism. During the last decades, various applications using synthetic RNA as biotechnology and/ therapeutic tool have been developed. These include gene knockdown by RNA interference (siRNA and miRNA), immunotherapy through activation of innate immunity by Toll-like-receptor ligands (TLR-3 and TLR-7 ligands), or more recently gene editing by the CRIPR/Cas9 systems.
Because it is a highly negatively charged molecule, delivery of RNA to mammalian cells remains problematic, particularly in vivo. One of the strategies used so far rely on coupling the RNA to a carrier allowing uptake into the cells. Coupling occurs usually by a synthetic linker covalently bound to the RNA on one side, and to the carrier on the other side. The carrier is usually a mAb (as for bioconjugates), a cholesterol moiety, a biotine moiety, a cell-penetrating peptide. Another application is the linking of a fluorescent chromophore to the RNA of interest in order to visualize it in a cell, a tissue or an organism.
One of the major problems of coupling of RNA to a carrier results from the inhibition of the biological activity of the RNA by the carrier. This is often due to a steric inhibition of the interaction of the RNA with its ligand. Indeed, as observed in bioconjugation of biologically active RNA molecules such as siRNA and miRNA mimics to mAb, siRNA and miRNA mimics range from 14-25 KDa, and carriers such as mAb range from 150-220 KDa. Upon conjugation of siRNA to mAb, a macromolecular complex is generated. This macromolecular complex may build aggregates that hinder the biological activity of the siRNA and/or miRNA mimic.
Riboxx has developed a new technology called riboLINK®. riboLINK is an endosome-cleavable linker of RNA to carriers such as mAb, cell-penetrating peptides, or cholesterol and biotine moieties, and red or green fluorescent labels, among others.
The riboLINK technology allows covalent coupling of siRNA, miRNA, and TLR-ligands to carriers allowing specific and efficient delivery of biologically active RNA to mammalian cells. Upon internalization into the endosome, the acidic milieu of the endosome cleaves riboLINK, releasing the biologically active RNA from the carrier. The RNA can then interact freely with its ligand, displaying its biological activity.

B.    Results and Discussion

B.1   riboLINK siRNA is released from its linker in the late endosome

riboLINK is a potent technology for gene knockdown by siRNA or miRNA mimics in mammalian cells. riboLINK siRNA is designed as siRNA or miRNA mimic linked covalently to a group such as biotin, or fluorophores green488 or red555. Upon uptake by endocytosis, riboLINK siRNA or miRNA are processed in the endosome in the presence of a net decrease in pH of the endocytic milieu. This acidification leads to the cleavage of the linker and subsequent release of the siRNA or miRNA from the complex. The released siRNA is then delivered to the RISC complex (i.e. Ago2) and upon loading of the guide strand, gene knockdown is triggered.
A brief description of the molecular mechanisms is shown in Fig. 1. 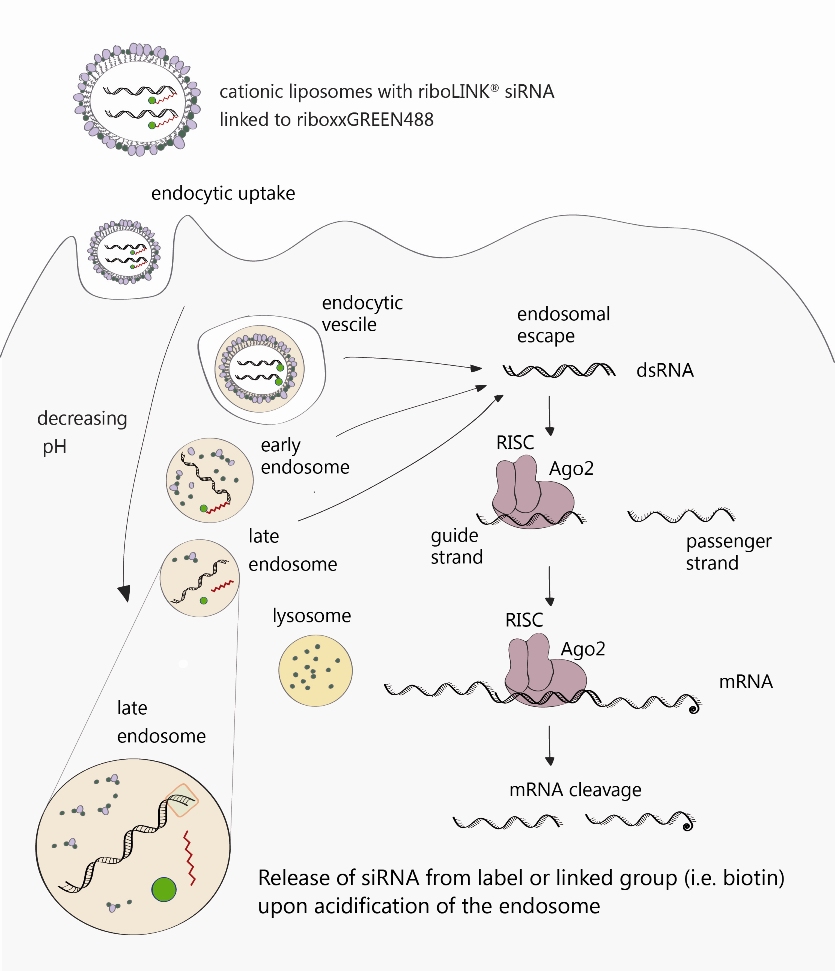 Fig. 1. Description of the molecular mechanisms underlying the riboLINK Technology. As an illustrative example, the riboLINK siRNA green transfected in cationic liposomes is used.

B.2   riboLINK linker is cleaved in a pH-depedent pattern over time

The sensitivity of riboLINK to acidification was further investigated in vitro. riboLINK siRNA green was incubated over time with 3 different buffers having pH values of 7.5, 5.5 und 4.5. The release of the fluorophore (here green488) upon degradation by the acidic milieu was investigated by PAGE. As shown in Fig. 2, a net decrease in the fluorescence intensity was observed at pH 5.5 and 4.5 at 4h post incubation. This indicated degradation of the linker between the flurophore and the siRNA. Of note, the siRNA remained intact, as observed upon staining of the RNA with a dye (Stains-all). 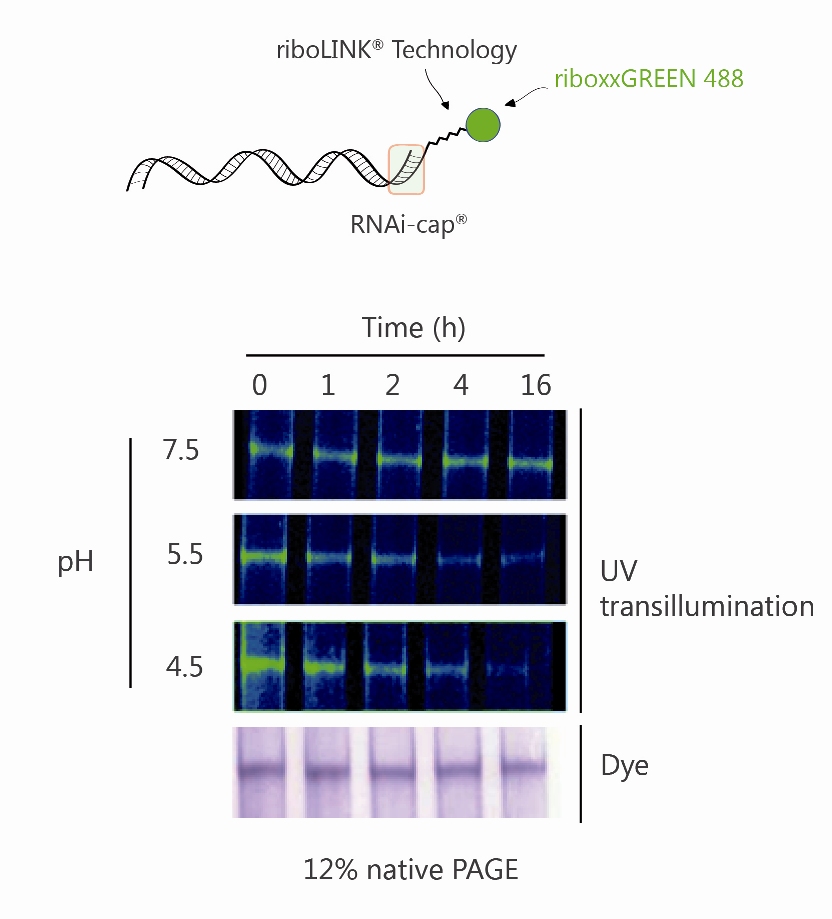 Fig. 2. pH-dependent cleavage of riboLINK linker from a riboLINK siRNA green in vitro. The riboLINK siRNA green was incubated with a buffer at three different pH. The release of the fluorophore (here green488) was visualized by UV-transillumination at different time points as indicated. As a control, the gel stained with a dye specific for RNA was used (Stains-all).

In a further experiment, gene knockdown of a house keeping gene (GAPDH) in cancer cells was investigated. riboLINK siRNA red, green or biotin targeting GAPDH were used and gene knockdown of GAPDH evidenced by western blot. As shown in Fig. 3, riboLINK siRNA induces more then 70% silencing compared to a mock (transfection control or a cell control). 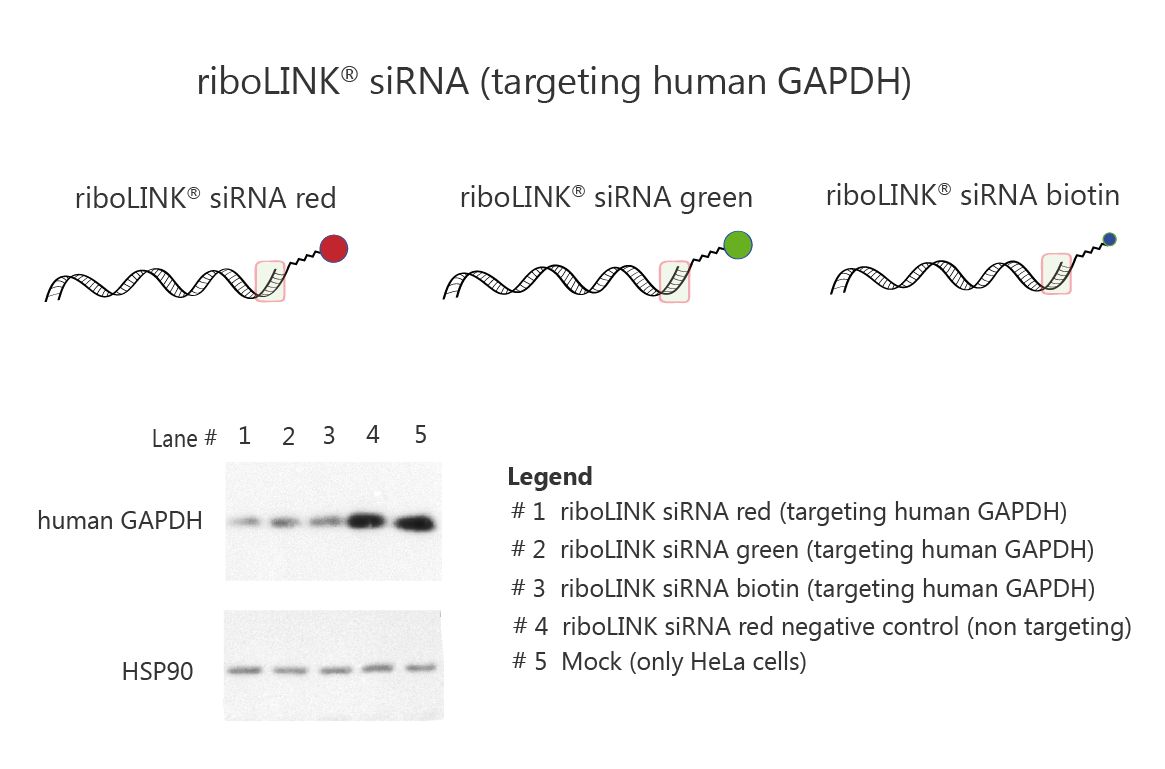