The new RNAi-cap for potent and specific gene knockdown

The RNAi-cap®: what is it exactly?

Riboxx has invented and validated a new design for siRNA (Fig. 1) . So far, siRNA offered by all other companies are duplex RNA with 3´-overhangs or blunt ends. The siRNA design invented at Riboxx features the new RNAi-cap technology, as shown in Fig. 1.
The siRNA designed by Riboxx is a blunt-end siRNA of 24 bp in length. It has at the opposite of the SEED region the RNAi-cap that is a strecth of 5x[C/G]s. 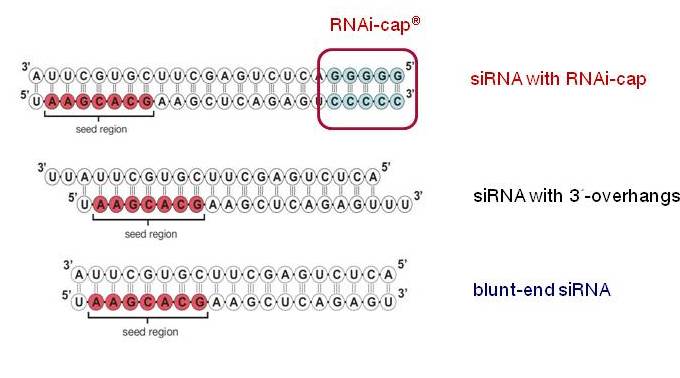 The RNAi-cap increases the stability of the duplex at the opposite of the SEED region, as it consists of a stretch of G and Cs perfectly annealed.

As a consequence, the RISC unwinds the duplex at its less stable end, meaning where no RNAi-cap is present. This leads to increased loading of the guide strand to the RISC. The passenger strand is then discarded, and off-target effects reduced.

Additionally, much less siRNA are needed for an effective gene silencing with a further  reduction of off-target effects [1].
Moreover, because the duplex is more stable, it has an improved stability of siRNA duplex with subsequent improved half-life in body fluids.