Potent gene knockdown in VIVO with the RNAi-cap

Experimental gene knockdown in small animals is an important pre-requisite for validation of cell culture experiments in the fields of cancer research, degenerative diseases and metabolic diseases. Usually, after successful gene knockdown in cell culture, scientists move to experiments in small animals with the same siRNA or miRNA mimic so far used. Therefore, they order large scales of siRNA or miRNA mimic desalted and endotoxin free. Because RNA is degraded in body fluids within minutes (de Fougerolles et al., 2007) high amounts of siRNA or miRNA mimics are needed, in repeated applications.This results in two major problems: i) an increased toxicity in animals due to off-target effects and the burden of the RNA by itself that activates innate immunity (Kleinmann et al., 2008), and ii) the resulting high costs of the RNAi reagents.

B.   Results and discussion

B.1   The RNAi-cap increases serum resistance of siRNA 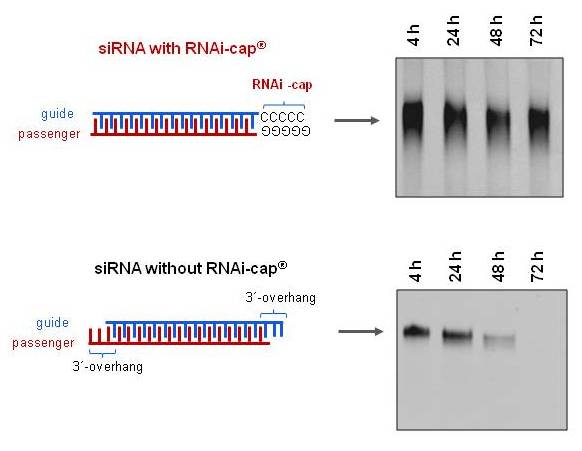 Fig. 1. The RNAi-cap confers serum resistance to the siRNA. siRNA were incubated at a concentration of 3 µM in mouse serum (80% v/v) at 37°C for 72 hours (3 days). At indicated time points, integrity of the RNA duplex was assessed by 20% native PAGE. Visualization was performed by UV transillumination after staining by GelRed.

B.2   The RNAi-cap increases gene knockdown potency up to a 5 fold 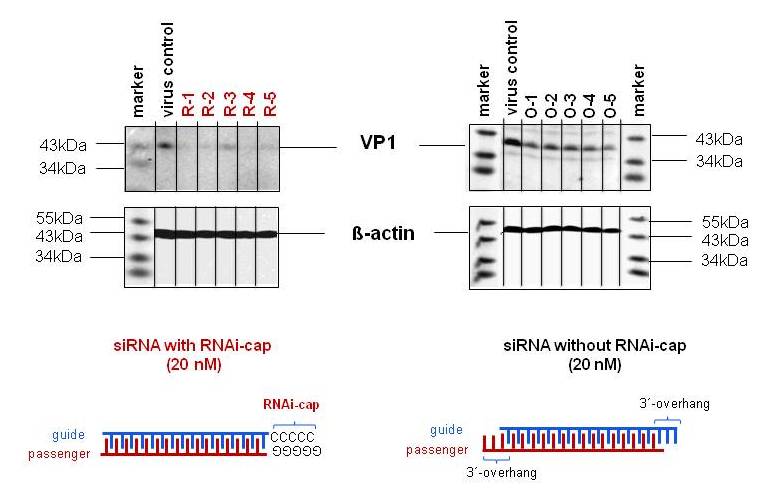 Fig. 2. Increased potency of gene knockdown with the RNAi-cap technology. Five siRNAs with the RNAi-cap technology (R-1 to R-5) and five standard siRNAs with 3´-overhangs (O-1 to O-5) were transfected at a concentration of 20 nM as to their gene silencing potency on virus gene expression in HeLa cells. The siRNAs were directed against the viral protein VP1. All siRNA with the RNAi cap (R-1 to R-5) were able to silence the VP1 gene at a concentration of 20 nM. In comparison, no silencing was observed when the siRNAs without the RNAi cap (O-1 to O-5) were used at the same concentration. As a control, ß-actin expression was detected. M, Protein marker, as indicated.

In the following experiment, cells were infected with HRV1B and cell proliferation measured. In the presence of the RNAi-cap the siRNA displayed an up to 5-fold higher potency in comparison to siRNA without the RNAi-cap. The lowest EC50 observed (siRNA#2) was 14 nM. This siRNA#2 was used in further gene knockdown experiments in animals

B.3   The RNAi-cap results in a potent gene knockdown in vivo

In a further step, BALB/c mice were infected with the virus HRV1B, and the siRNA applied intra-nasally at a concentration of 4 mg/kg (total amount: 80 µg, equivalent to 6 nmol of siRNA). In the animals treated (n=4), the viral load decreased at 24h, in contrast to the placebo. These results indicate that the siRNA bearing the RNAi-cap successfully cleared the virus from the lung of the animals after intra-nasal application. 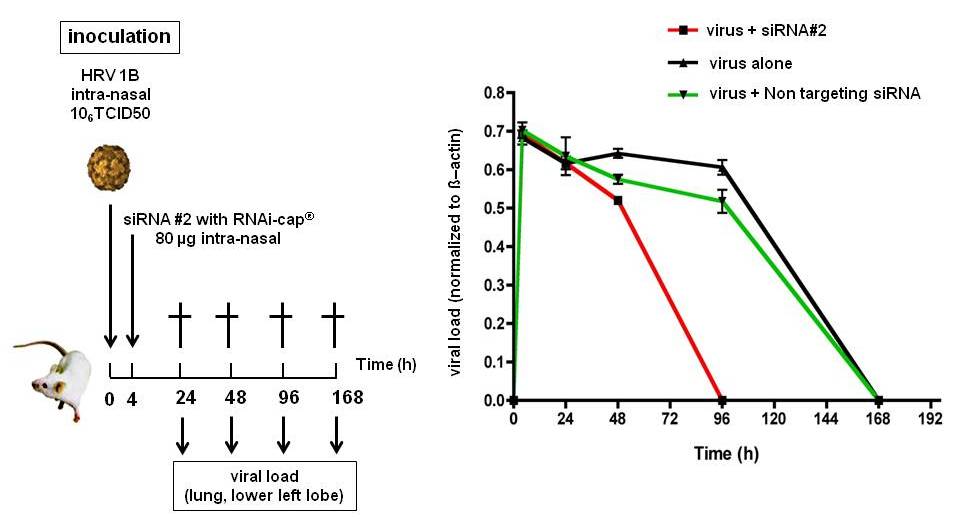 Riboxx has developed a new technology, the RNAi-cap, that is dedicated to gene knockdown in vivo. This new technology increases resistance of siRNA or miRNA mimics to body fluids in particular in serum up to 72 h and increases potency of gene knockdown up to 5 fold. The RNAi-cap is present in the iVORi siRNA and the CONmiR miRNA mimics of Riboxx. The siRNA and miRNA mimics used in experiments with small animals are delivered “salt free” and “endotoxin free” as CLINIgrade® products.